Like in previous years, a few of us from Fedora were at PyCon US in Portland Oregon for the week. The conference is over now (I'm sticking around for a day to explore the Pacific Northwest). Here are some of the highlights from the talks attended and the community sprint days:

Talks worth checking out

For the community code sprints, I hacked with a couple other people on the test suite for koji which is the build system used by Fedora and many other RPM-based Linux distributions. We have a lot of web services and systems that go into producing the distro. Koji was one of the first that was written back in the day and it is starting to show its age. Getting test coverage up to a reasonable state is a pre-requisite for further refactoring (porting to python3, making it more modular, faster, etc..).

Huge shoutout to Sijis Aviles, Joel Vasallo, and Robert Belozi for slogging through it with me. We had fun!

Backend rewrite of the Fedora-Packages webapp

Just yesterday, we deployed the 3.0 version -- a rewrite -- of the fedora-packages webapp (source). For years now, it has suffered from data corruption problems that stemmed from multiple processes all fighting over resources stored on a gluster share between the app nodes. Gluster's not to blame. It's that too many things were trying to be "helpful" and no amount of locking would seem to solve the problem.

We have lots of old, open tickets about various kinds of data being missing from the webapp. Those are hopefully all resolved now. Please use it and file new tickets if you notice bugs. Patience appreciated.

Let's take a look at the internal architecture of the app. It's a cool idea. It doesn't really have any data of its own, but it is a layer on top of our other packaging apps; it just re-presents all of their data in one place. This is the "microservices" dream?

Here we have a diagram of the system as it was originally written in its "2.0" state.

HTTP requests come in to the app either for some initial page load or for some kind of subsequent ajax data. The app hands control off to one of two major subsystems -- a "widgets" controller that handles rendering all the tabs, and a "connectors" dispatcher that handles gathering and returning data. The widgets themselves actually re-use the connectors under the hood to prepare their initial data.

More complicated than that

First, there are only three widgets/connectors depicted above, but really there are many more (a search connector, a bugzilla connector, etc..). Some of them were written, but never included any place in the app (in the latest pass through the code, I found an unused TorrentConnector which returned data about Fedora torrent downloads!).

Note that over the last few years, the widgets subsystem has remained largely unchanged. It is a source of technical debt, but it hasn't been the cause of any major breakages, so we haven't had cause to touch it. The widgets have metaclasses under the hood, can be nested into a hierarchy, and can declare js/css resource dependencies in a tree. It's pretty massive -- all on the server-side.

There is also (not depicted) an impenetrable thicket of javascript that gets served to clients which in turn wires up a lot of the client-side behavior.

Lastly, there are (were) a variety of cronjobs (not depicted) which would update local data for a subset of the connectors. Notably, there was a yum-sync cronjob that would pull the latest yum repodata down to disk. There was a cronjob that would pull down all the latest koji builds "since the last time it ran". Another would crawl through the local yum repos and rebuild the search index based on what it thought was in rawhide.

Just... keep all that in mind.

Focus on the connectors 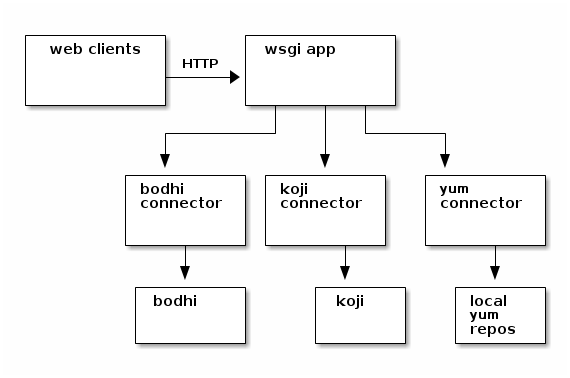 So, when it was first released, this beast was too slow. The koji connector would take forever to return.. and bugzilla even longer.

To try and make things snappy, I added a cache layer internally, like this: 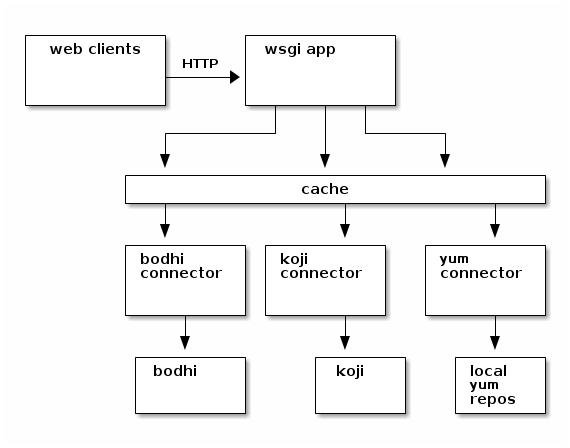 The "connector middleware" and the widget subsystem would both use the cache, and things became somewhat more nice! However, the cache expiry was too long, and people complained (rightly) that the data was often out of date. So, we reduced it and had the cache expire every 5 minutes. But.. that defeated the whole point. Every time you requested a page, you were almost certainly guaranteed that the cache would already be expired and you'd have to wait and wait for the connectors to do their heavy-lifting anyways.

That's when (back in 2013), I got this idea to introduce an asynchronous cache worker, that looked something like this. 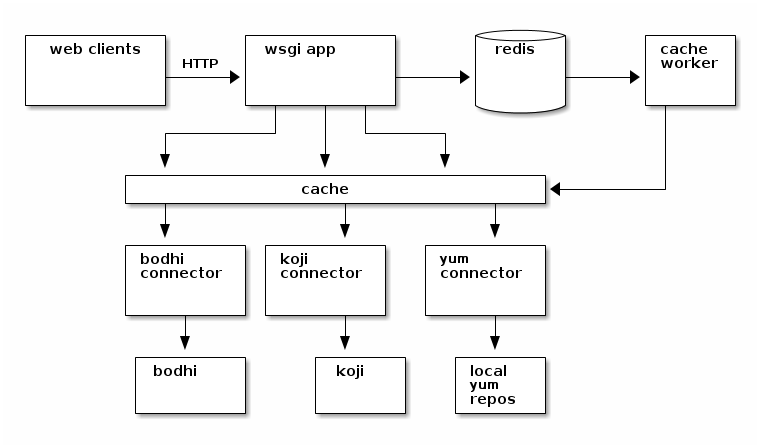 If you requested a page and the cache data was too old, the web app would just return the old data to you anyways, but it would also stick a note in a redis queue telling a cache worker daemon that it should rebuild that cache value for the next request.

I thought it was pretty cool. You could request the page and sometimes get old data, but if you refreshed shortly after that you'd have the new stuff. Pages that were "hot" (being clicked on by multiple people) appeared to be kept fresh more regularly.

However, a page that was "cold" -- something that someone would visit once every few months -- would often present horribly old information to the requester. People frequently complained that the app was just out of sync entirely.

To make matters worse, it was out of sync entirely! We had a separate set of issues with the cron jobs (the one that would update the list of koji builds and the one that would update the yum cache). Sometimes, the webapp, the cache worker, and the cronjob would all try to modify the same files at the same time and horribly corrupt things. The cronjob would crash, and it would never go back to find the old builds that it failed to ingest. It was a mess.

Two really good decisions were made in the latest rewrite: 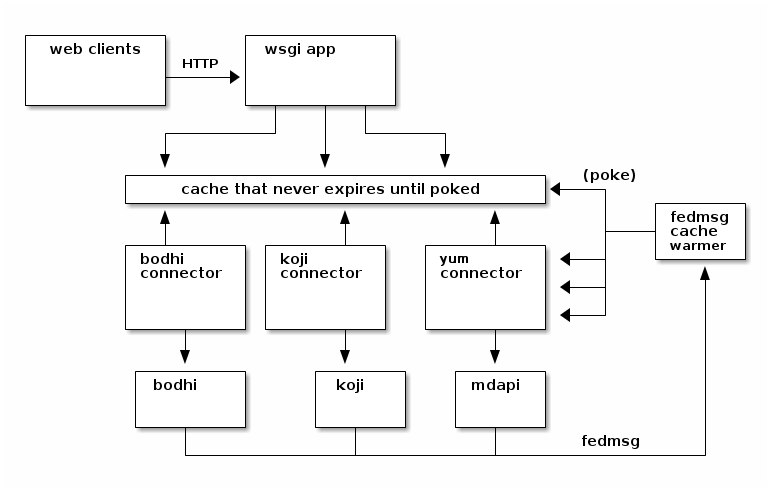 With those two changes, we were able to kill off all of the cronjobs.

Some additional complications: first, the cache worker also updates a local xapian database in response to events (in addition to the expiration-less cache), but it is the only process doing so and so can hopefully avoid further corruption issues.

Second, the bugzilla connector can't work like this yet because we don't yet have bugzilla events on our message bus. Zod-willing, we'll have them in January 2016 and we can flip that part on. The bugs tab will be slower than we like until then. UPDATE: We got bugzilla on the bus at the end of March, 2016.

We're building the fedora-hubs backend with the same kind of architecture (actively-invalidated cache of tough-to-assemble page data), so, we get to learn practical lessons here about what works and what doesn't.

Do hit us up in #fedora-apps on freenode if you want to help out, chat, or lurk. I'll be cleaning up any loose bugs on this deployment in the coming weeks while starting work on a new pdc-updater project.

All thanks to Abdel Martínez and Matej Stuchlik, we're going to be holding a (virtual) international "Fedora Activity Day" for Python 3 porting, and it is going to be amazing. Save the date -- November 14th and 15th 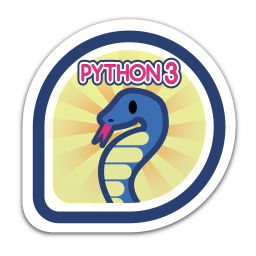 Speeding up that nose test suite.

Short post: I just discovered the --with-prof option to the nosetests command. It profiles your test suite by using the hotshot module from the Python standard library and it found a huge sore spot in my most frequently run suite. In this pull request we got the fedmsg_meta running 31x faster.

That test suite used to take forever. It's the whole reason I wrote nose-audio in the first place!

I wrote last week about how a few of us from Fedora were at PyCon US in Montreal for the week. It's all over and done with and we're back home now (I got a flu-like bug for the second time this season on the way home...) So, these are just some quick notes on what I did at the sprints!

That's all I can remember. It was a whirlwind, as always. Happy Hacking!