If you have problems with the video, you can download it directly here in ogg or webm.

As before, I used gravatar.com to grab the avatar images, using the FAS_USERNAME@fedoraproject.org formula.

Props to decause for the idea.

I haven't noticed any dropped messages since then: a marked improvement. However, our volume of messages is so much higher now that it is difficult to eyeball. If you notice dropped messages, please let me know in #fedora-apps on freenode.

Bill Peck wanted to know if he could consume messages from the Fedora Infrastructure message bus without using the fedmsg libs and stack. The answer is yes.

I wrote up an example for him and turns out it was pretty simple, simple enough to warrant being added as its own new section in the docs.

p.s., in other news Amit Saha has a post up on collecting stats from the fedmsg bus. This is exciting to me.

So, my project for Fedora Infrastructure (fedmsg) connects around with zeromq. Way back in the Spring of this year, skvidal suggested that I "fuzz" it and see what happens, "fuzz" meaning try to cram random bits down its tubes.

To fuzz the subscriber, I had it connect to a garbage source built with /dev/random and netcat. In one terminal, I ran:

and in the other, I ran:

To fuzz the publisher, I hooked /dev/random up to telnet:

... and it didn't fall over. Encouraging.

So I'm spinning up the Fedora Messaging SIG. It's been sitting idle for years; this time we're really going to do it. We're going to put 0mq messaging hooks into bodhi, koji, pkgdb, fas, you name it.

I'm building a python module called fedmsg to wrap it all and it comes with a proposal-in-development. And if you're not excited yet, we've already 0mq enabled the Moksha Hub and achieved a ~100 times speedup over AMQP/qpid.

The point of this post is to ask about times for an IRC meeting of the Messaging SIG. Right now I'm thinking Tuesdays at 16:00-17:00 UTC in #fedora-meeting. If you're interested in helping with the effort but that's a bad time for you, let me know and we'll work it out.

I'll be out at PyCon until next Wednesday; so the first meeting won't be until March 20th at the earliest. 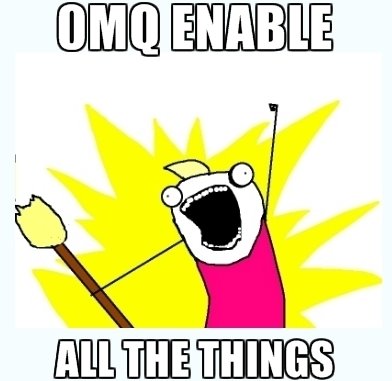